This month I had the rare opportunity to see a man fly while his feet were still planted firmly on the ground.

Farruquito, the grandson and heir to the legacy of the infamous Farrucos Gypsy familia, appeared at New York’s City Center as part of the 2016 Flamenco Festival.  This 90 minute show featuring a cast of 2 guitarists, a percussionist and 4 vocalists and a guest appearance by female flamenca Gema Moneo delivered on all accounts; 90 minutes of unbridled impassioned music and dance.

Every second of this 90 minute show was emotionally charged. After seeing many flamenco shows around the world this was the first time in my life, that I had ever been moved by the vocalists in a flamenco performance. It didn’t matter that they were singing in a language I didn’t understand.  There was a universality in the way they sang that made you understand them – not their exact words, but understand how they were feeling, why they were there.  Sitting in my chair, I could feel my soul (perhaps my duende) dancing with them. It was so hard to resist the temptation to get up out of my seat and dance with them in what seemed to be the convocation of the flamenco spirits.

Then like a sorcerer moving stealthily through the shadows he appeared.  The Farruquito.  His presence alone demands attention.   As he stood there, it was as if you could feel the spirits of his ancestors convening in his body.  And, when he was ready, he began dancing.

Every movement, and every part of his body, from the tips of his fingernails to the ends of his hair was overflowing with passion.  His formidable footwork mesmerized the  audience with its sheer speed and crystal clear clarity.  Each sound, every punta (toe), tacon (heel) or golpe (stamp) rolled effortlessly one after another at a rate so fast that confirmed that Farruquito was possessed with super natural power.  The way Farruquito moved with the music was as if the music inhabited his body and Farruquito was speaking in tongues.  For any dancer in any genre of any level this is the epitome of what you want to achieve through dance.  To be possessed by the music, fearless and truly free…as if you were flying. And fly he did.  As he finished each escobilla with his exhilarating footwork he would take us with him , up to the heavens, and like that with his final stamp – SILENCE.  And there he would float, in the spotlight soaring up to the mezzanine. 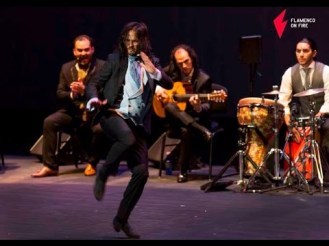 As dancers we always strive to be one with the music .  Our aim is to be the physical and visible expression of the music.  Dance is music made visible, as the saying goes.  After decades of training, and watching great dancers in various tyles this was the first time EVER I saw this theory in practice.  You couldn’t separate Farruquito from the music, he and the music were one singular being – and the only word to describe it is magical.

Thank you Farruquito.  For showing me that it is possible to dance as one with the music. That it is not just a concept or merely a state of mind, but something that is physically possible.  Thank you for re-affirming what we should be searching for as dancers – as artists.  One day, while my feet are planted in the ground, connecting with the Earth with every step, every stamp and every slide, I hope i can fly like you.

So for the past 10 days or so I’ve been MIA from my life. An ongoing neck injury that I’ve been putting up with for the last 10 years or so decided to go to the next level on me, and render me useless in any way, shape, or form. It all happened suddenly at 4am on Friday morning when I woke up in pain unable to move my neck in any direction, and feeling excruciating jabs of pain with every movement.  Not being able to find a position of comfort be that sitting, lying, standing, or crawling, I have just endured 10 days of absolute stillness (which is impossible with a three year old). No running, gym-ing, stair climbing, yoga and worst of all…no dancing.  [Watch me as I pick my soul up from the floor and try to piece it together with medical tape.]

I have subsisted on a diet of Magnesium tablets and painkillers, and have lost all sense of smell due to constantly inhaling the stench of ‘fast-acting pain relief’ creams. In my desperation to get back on the dancefloor and make the most of my time in NYC, I have subjected myself to trigger point acupuncture, and wait for it…..cupping.  While neither were very painful, and the cupping seemed a bit nonsensical to me, I must admit I’m amazed at how it makes me feel the next day.  All but a minor pain on my left side (now), all the usual spots that have always had some type of pain are actually pain free (could this be?).   I’ll give my verdict after I complete my five sessions.

I’ve been rather depressed and miserable for the last week or so, wallowing in self-pity, feeling eternally bloated, and just plain useless. It’s funny, you would think that I would welcome the forced rest.  No gym-ming, running, yoga-ing or dancing.  Woo hoo!! An excuse to lie down for the whole day and just sit back and chill.  No working on the lap top either as tilting the head down also causes sharp pangs to run down my neck and back. But no, I’m just miserable.  Why is that? Does everyone feel this way? Dancers, singers, athletes anyone? Do you get depressed and just plain miserable when you can’t do what you love?  Therapists, physicians they all say “rest”,  we look for reasons not to rest and justify our actions when we don’t; and then we’re rendered simply useless because we didn’t.   Now what?  Just wait?  The last time I was forced to “rest” like this was after childbirth.  You can imagine how well I took that (combine that with no sleep, being treated like a cow, and an endless supply of visitors).  But now, staring at my three year old running around, unable even to play with him (cussing under my breath trying to dress him and put him to bed) I start to wonder how did I become so dependent on dance to be happy? Is this healthy? Is this a genetic? A personality disorder more likely, have I somehow been groomed to be this way?  I have so much to be happy and grateful for and after a week of no dancing here I am feeling lost and with no purpose (really?)….Dr. Phil, Oprah, somebody help!